Members of both the Wimberley HS girls' and boys' basketball teams were recognized by receiving season accolades. 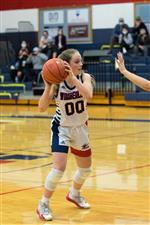 Leading the way for the Lady Texans was sophomore guard Emily Thames (left), who was named to the Texas Association of Basketball Coaches (TABC) Region IV Team and also a First Team 28-4A All-District selection. Junior Brooke Burcham was also named to the All-District First Team.

Senior Rhyan Masur and juniors Makenzie Haston, Madelynne Rivera, and Alex Rushing were all named to the 28-4A All-District Second Team. Senior Carson Crowder and junior Grace Harney were named to the Honorable Mention team. In addition, the entire team was named Academic All-District (Burcham, Crowder, Harney, Haston, Kaitlyn Kohls, Masur, Tessa Milam, Rivera, Rushing, Thames). The Lady Texans finished third in District 28-4A and lost in the bi-district round of the playoffs. The girls are coached by Caleb Hall.

The Texans qualified for the playoffs as the second place team from District 28-4A and were ousted in the bi-district round of the 4A playoffs. The boys are coached by Michael Whitten.